What will I do about my breast?

This page by Professor John Boyages, click here for more

The absolute medical reasons to have a mastectomy are: 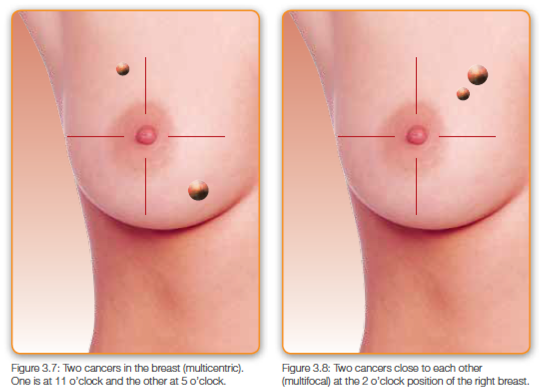 Having a strong family history of breast cancer is not necessarily an indication for a mastectomy. Some doctors do occasionally recommend removing both breasts in this setting, but there is no consistent evidence that this increases your chance of surviving breast cancer (Recht 2009). Recht recently noted that some caregivers recommend a mastectomy for patients with strong family histories of breast cancer, or with a BRCA1 or 2 defect or mutation, because they feel that breast conservation is not effective in this group. He notes that this recommendation lowers the psychological barrier to removal of the normal breast. This has resulted, without strong research evidence, in removing both breasts for patients with strong family histories. However, he reports that most studies have found little or no difference in the chance of cancer coming back after breast conservation for patients with or without the breast cancer gene.

The difference between a breast surgeon and a general surgeon

Surgeons are always trained first as general surgeons, and then they usually specialize in a field such as brain, heart, or breast surgery, particularly if they work in a large hospital or academic university hospital. If you can, consult a breast surgeon who sees and treats breast cancer every single day. Take care if your surgeon spends a lot of his or her week doing gallbladders, hemorrhoids, varicose veins, or colorectal cancer and only operates on the occasional patient with breast cancer.

Ask your surgeon, “Do you treat conditions other than breast cancer—just in case we need you for something else?” It’s a bit of a trick question, but this is a polite way of trying to work out if he or she is a general surgeon rather than a “breast surgeon.” I do, however, exclude very experienced rural surgeons. It’s impossible for every country town or small state to have a breast surgeon. My experience of these country surgeons is that they provide an exceptional service and work very hard to keep up to date and link in with experienced breast surgeons by telephone, e-mail, or video conference.

Remember that an experienced general car mechanic in the country may still be better than the young Ford mechanic in the city. You can ask the surgeon, “What proportion of your work is breast disease?” Remember that very busy breast surgeons may focus 80–90 percent of their practice on breast disease and 10 percent on hormone conditions such as thyroid disease. Some surgeons sub-specialize in cancer operations (surgical oncologist), and some may focus on both breast cancer and melanoma (a type of skin cancer). Breast surgeons know about sentinel node mapping and the sentinel node biopsy technique, explained in the next chapter, and generally work in a team that includes at least a radiation oncologist and a medical oncologist.

What is oncoplastic surgery?

Your surgeon may also discuss adjusting the appearance of your other breast to more closely match your treated breast. This is often known as “contralateral symmetrization”. Achieving symmetry of the healthy side with a reduction known as a reduction mammoplasty breast lift or “mastopexy.” Lipofilling may be done after breast reconstruction to fix small areas of asymmetry or defects in the shape of the reconstructed breast compared to the normal breast. It can also be done after breast conservation. Fat tissue is removed from another part of the body such as the tummy area, and then injected into the reconstructed breast to improve its shape or fullness.

The skin-sparing mastectomy was first described over 20 years ago in an effort to maximize preservation of the skin of the breast after a mastectomy, to improve the cosmetic appearance of the breast and to make breast reconstruction easier by having more tissue to work with (Toth 1991). It typically involves removal of the entire breast and nipple-areola complex while preserving the skin envelope and the natural curvature under your breast (the inframammary fold).

Because less skin is removed, research has been done which looked at the chance of finding residual breast tissue or even disease under the skin that is left behind after a skin-sparing mastectomy. In one study, the chance of finding residual breast tissue was almost 60% and residual disease was left behind in 10% (Torresan 2005). Despite this, with well-selected patients the chance of a recurrence after a skin-sparing mastectomy is very low. In a review article, Tokin (2012) reported on five studies involving 368 patients, of whom four patients recurred (1.1%). Most of these studies had short observation periods of less than 5 years. This rate is likely to go up a little with time.

Usually after a skin-sparing mastectomy, because of the amount of skin left behind (the so called “skin-envelope”), reconstruction needs to take place either with an expander followed by a silicone implant at a later date or an immediate silicone implant. Or, for some patients with larger breasts, a flap with some normal skin and muscle tissue can be used (see Control Point # 6 What are my Options for Breast Reconstruction?”). A variant of a skin-sparing mastectomy is a “skin-reducing mastectomy” used for larger breasted women which is like a combination of a breast reduction and a reconstruction with an immediate implant.

Radiation therapy may still be indicated after these types of procedures and this may cause some thickening around your implant and some asymmetry. The indications for post-mastectomy radiation are discussed in Control Point #14 Do I Need Radiation Therapy?

Complications after a skin-sparing mastectomy include infection, other wound complications or loss of the implant. There is a higher risk of delayed wound healing with skin-reducing mastectomy than with other mastectomy types because the blood supply needs to be distributed to a larger portion of skin. For the standard skin- or nipple-sparing mastectomy, wound healing is usually not a problem, because, in fact, the incisions used are smaller than that of a standard mastectomy. Implant loss has been reported to be on average around 14% (Kobraei 2012).

The ducts inside of the nipple (its “core”) are usually removed. Nipple-sparing mastectomy is particularly suitable for women with smaller breasts and often the other breast is enlarged with an implant at the same time (Figure 3.15). This is still possible with larger breasted women, but nipple-sparing mastectomy has been considered safe for women with small, solitary  tumours located away from the nipple or when a mastectomy is done as a preventative measure. Some women may have a skin-sparing mastectomy on the side of their cancer and, because of an increased risk on the other side, due for example to a strong family history, may have a nipple-sparing mastectomy on the healthy side to reduce their future risk of cancer developing. For other women, they may choose to have any decisions about the other side deferred until all their other treatments such as chemotherapy and radiotherapy are completed (Figure 3.16).

A review paper about nipple-sparing mastectomy examined all the publications which studied nipple involvement for women who had undergone a mastectomy (Rusby 2010). The authors found that 13 studies contained a minimum of 100 patients per study and over 4500 total patients. The average incidence of nipple involvement was 14% (range, 6-31%). These studies are not all alike and vary by not only the type of patients who were included (ranging from early to more advanced disease) but also the pathology technique use to examine the nipple.

If you are keen to try this remember that if the nipple is involved there is still the option of going back and having a second anesthetic to remove the nipple and areola region. One large group from the US initially recommended a nipple-sparing mastectomy only after a pre-operative breast MRI showed no abnormality within 2cm of the nipple (Wijayanayagam 2008). However, as their experience evolved, they now only use an MRI in cases where the tumour is close to the nipple on clinical examination or mammography; if preoperative MRI demonstrates no clear tumour involvement of the nipple or areola, patients are still eligible for this technique, even if the tumour lies within 1cm of the nipple region (Peled 2012). This study, led by Laura Esserman, found that the tissue and ducts behind the nipple had disease present in only 3 out of every 100 patients (3%).

Another drawback of this technique is the chance of the nipple losing its blood supply and dying off (“necrosis”). It is likely that the risk is higher if you continue to smoke or if you are older or have vascular disease all of which can affect the blood supply and healing. Some researchers have found that nipple necrosis was more common when an incision was made centrally around the areola (periareolar incision) compared to a scar in the outer half of the breast (Regolo 2008). Others have found that using an expander (which slowly stretches the skin and nipple) rather than a permanent fixed volume implant improved nipple survival (Peled 2012).

In the review article, Tokin (2012) reported on 14 studies involving 2406 patients treated with a nipple-sparing mastectomy. Out of the 2406 patients, 257 (10.7%) developed some or total loss of the nipple. In total, 66 patients (2.7%) lost their entire nipple due to it dying off from a lack of blood supply, but there were lower rates of complications from different surgical approaches and techniques. Ask your surgeon about what his or her rates of nipple necrosis are and how many they have done.

Normal nipple sensitivity is very unusual after these procedures. Some sensation in the surrounding skin may be possible in many women and only a few nipples remain potentially erectile. The cosmetic results from a nipple-sparing mastectomy can be excellent (Figure 3.14) but you may appear unbalanced if some sort of lift is not done on the other side.

Radiation to the skin of your new breast may be required and this can tighten your skin a little causing more asymmetry. I have seen a few patients with disastrous cosmetic results from surgeons who really didn’t have the expertise to do this type of procedure. If you are considering this type of surgery, make sure you see a surgeon who has a lot of experience in this technique and, importantly, works in a multidisciplinary team. If your case is complicated, for whatever reason, it’s often worthwhile seeing other team members such as a plastic surgeon, breast care nurse, radiation oncologist and psychologist before your surgery. Remember, it’s not an emergency so you have time to reach the right decision for you.

So, it’s not that straightforward, and expertise for these types of operations vary. What is needed is a very careful discussion with a breast and/or a reconstructive surgeon to determine your potential to have one of these more advanced potentially one-stage procedures. Broadly speaking, the surgeons I work with consider the ideal patient to be one who does not have any oncological contraindication to a nipple-sparing mastectomy such as advanced cancer with skin involvement or disease very close to the nipple. This ideal patient would be a non -smoker, non-diabetic, unlikely to require post-mastectomy radiation with no underlying chronic disorders (such as diabetes or rheumatoid arthritis), be no greater than a C-cup breast and who after full consent understands and is prepared to accept all the potential risks and complications associated with implant based reconstruction. These operations also cost more.

Basically, what you are having with these new type of surgical approaches is a mastectomy—you still lose your entire breast, but you will lose less skin and sometimes keep the nipple.

Contact Us
This website is for informational purposes only and is not intended to be a substitute for medical advice from a physician or to create a standard of care for health care providers. Please check with a physician if you have any questions, need a diagnosis and/or for treatments as well as information regarding your specific condition.
Reclaim Your Curves 2015 - 2018